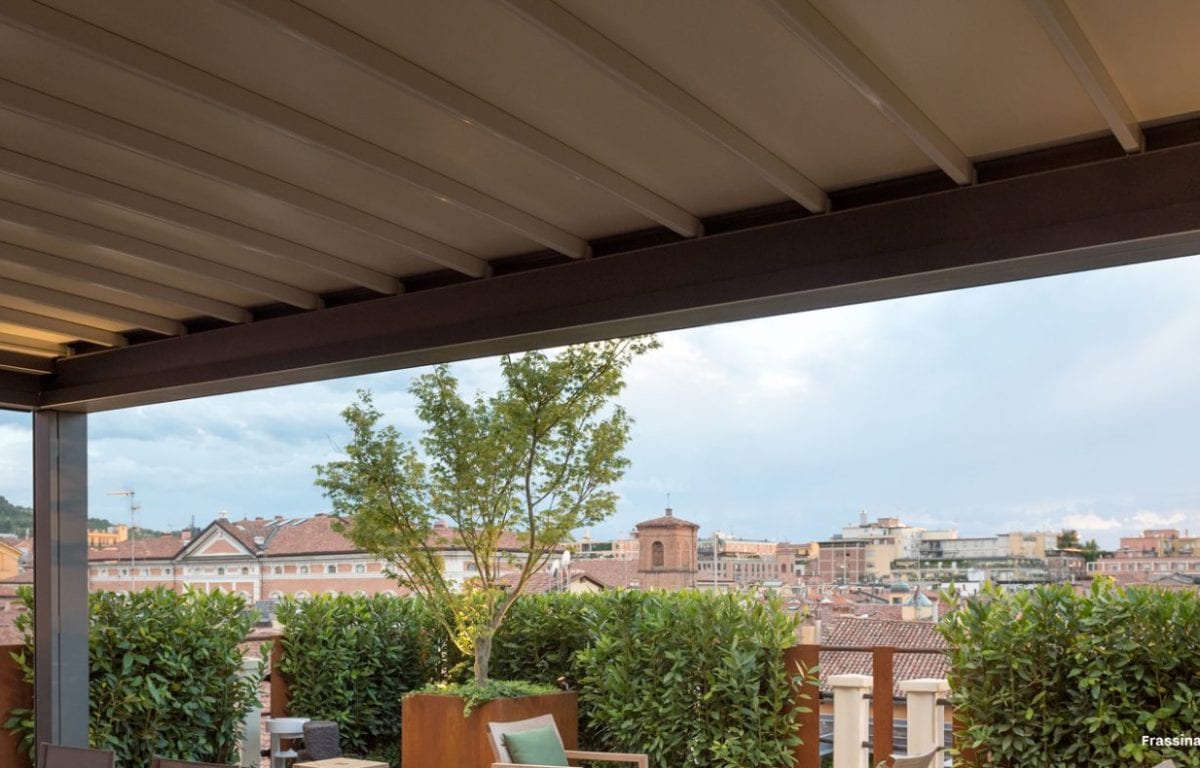 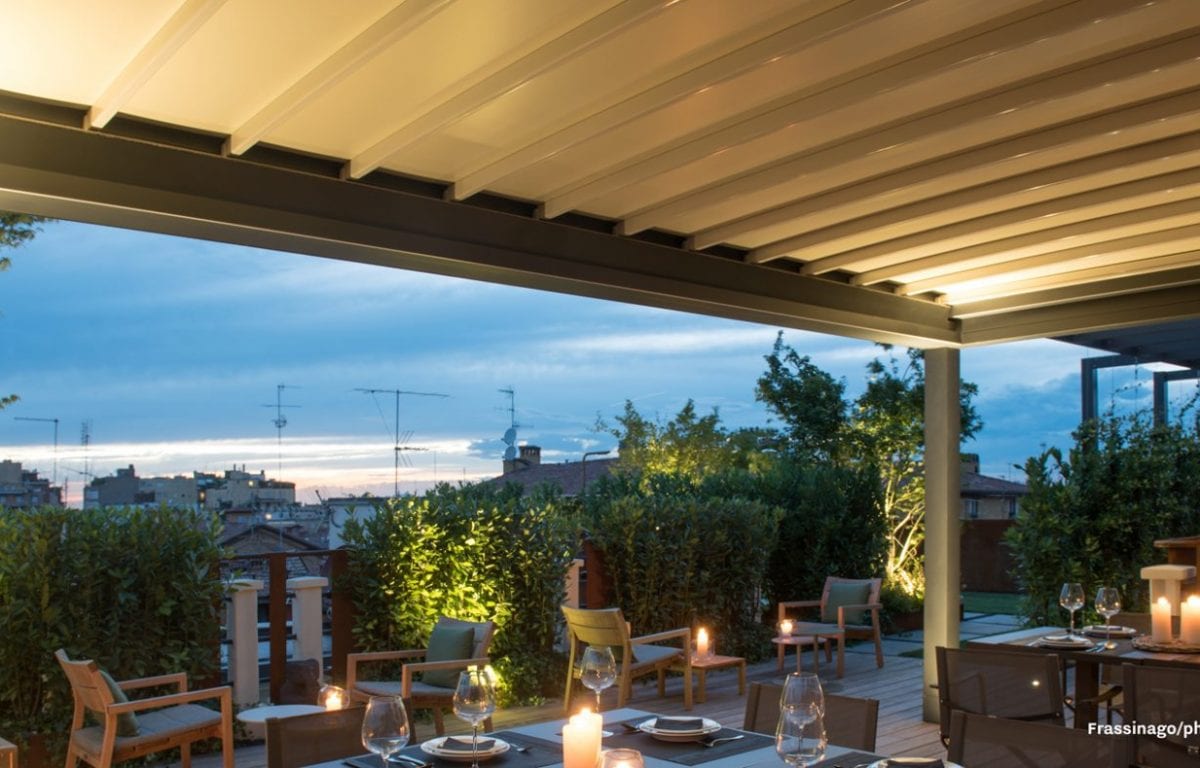 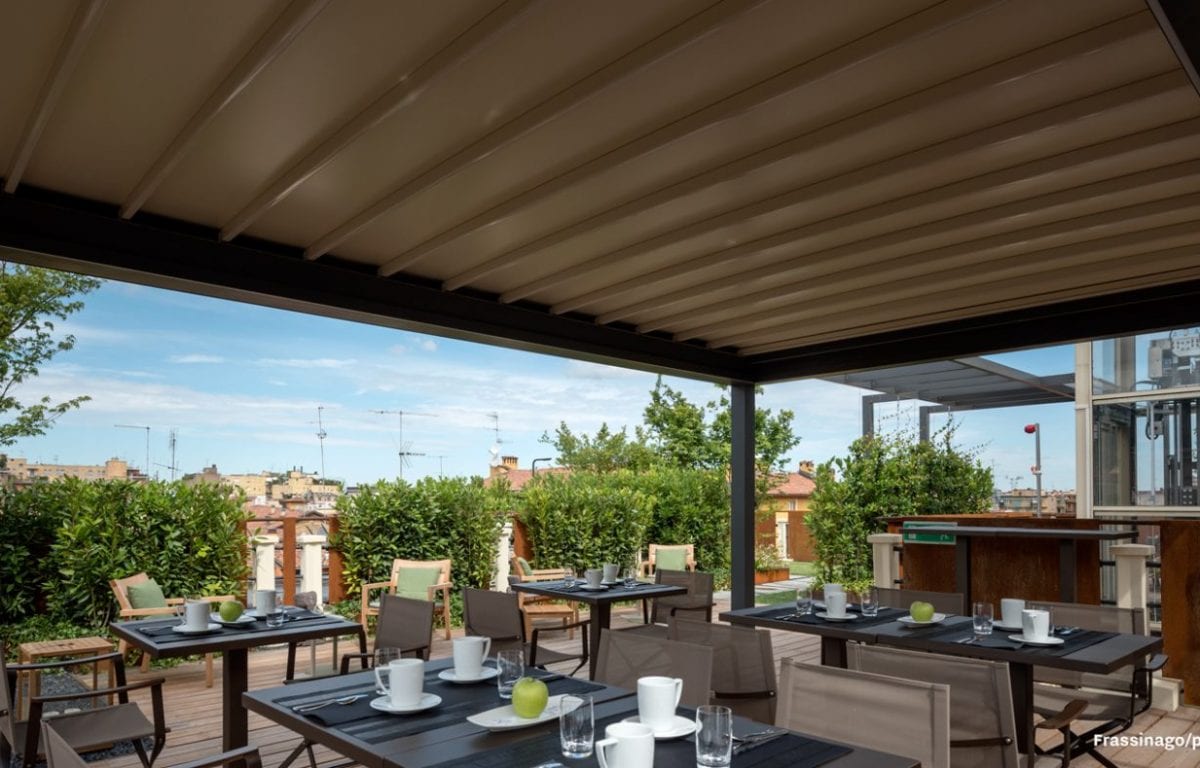 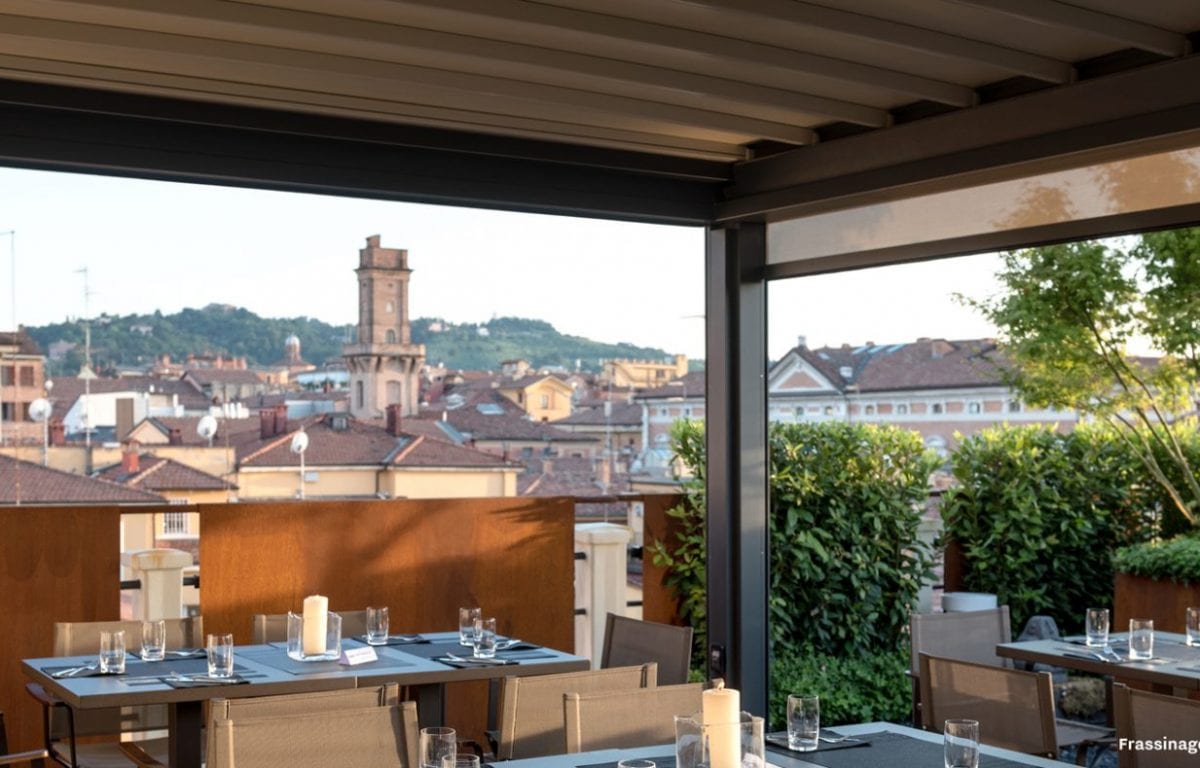 In the very central Metropolitan hotel, the aluminium structure of the Friulian company is the protagonist of the redevelopment of the solar pavement that from a totally unused surface becomes a panoramic roof garden. Perfectly integrated with the urban context, the roof houses the lounge-restaurant area and offers shelter during the sunniest hours of the day. In the evening, LED lighting inserted on the perimeter and on the breaker profiles provides soft mood lighting.

It takes place in the historic centre of Bologna, where the landscape architecture studio and construction company Frassinago has transformed the roof of the Metropolitan Hotel into a panoramic terrace overlooking the city and the nearby hills from the fifth floor.

The new roof garden is part of the redevelopment project of the entire hotel and has been designed to offer guests an exclusive outdoor space where they can enjoy moments of absolute relaxation: an area of over 200 square meters that includes a solarium and a lounge and restaurant area, hosted by the self-supporting pergola Nomo consisting of a module of six by four meters.

The enhancement of the suspended outdoor spaces represents a new concept for the Bologna hotellerie sector and this intervention is therefore one of the first examples, also in terms of extension and usability.

The result is a real roof garden, accessible by a lift directly from the hotel lobby, in which the greenery furnishes and becomes a distinctive element in the urban context: the perimeter hedges concealing the balustrades alternate with Maple trees used to emphasize the verticality of the terrace, while the lawn is interspersed with larch flooring, an Italian essence chosen for its resistance to atmospheric agents.

The pergola Nomo defines the restaurant area and offers shelter even during the sunniest hours of the day. It has been positioned to the south-west and, in addition to guaranteeing maximum privacy to guests, visually protects the back of the building by separating the area from the service areas. This is possible thanks to the Raso vertical awning integrated in the supporting profile of the pergola, which disappears completely when closed.

With its essential and clean lines, Nomo integrates discreetly into the context, enhancing the surrounding space. In fact, it has been conceived to meet the needs of architects and designers, who are increasingly oriented towards a design that prefers formal rigour.

Its structure made entirely of aluminium encloses the most important innovations that Pratic has introduced to the market and thanks to which the company has revolutionized the way of living outdoor spaces, both in the private and contract sectors.

In the evening, the atmosphere becomes even more evocative, thanks to the presence of RGB perimeter LEDs with white included and dimmable LED Line lights installed on the profiles supporting the sheet, while when it rains, the special calendering of the sheet profiles and a patented system of tilting eaves allow water to flow into the eaves contained within the upright profiles. And maximum ease of use is guaranteed by the motorised movement, managed by remote control. Great attention is also paid to safety thanks to the wind sensor that automatically operates the pergola in case of strong gusts.

The choice of colours is skilful: Nomo’s iron grey finish takes up the colour of the metal elements found inside and matches perfectly with the vegetation, wood and corten elements on the terrace.

This is an necessary category.